Making the decision to become a coach was not an easy one for Coach Ramon Fedee but has turned out to be a rather rewarding one. His family has always loved the outdoors and soccer quickly became the sport of preference when spending summer days at the community park. Having a history of soccer at the competitive level, Coach Fedee understood the values that soccer brings to you.

He says that through soccer, he has learned various life skills that a person will need throughout their life such as keeping healthy, spending spare time constructively, learning to deal with different personalities and handling success and failure.

Through these experiences at the soccer field, Ramon began to unconsciously instruct and teach his children the fundamentals of the sport. After a being suggested to the idea of coaching multiple times and with the intervention from his wife, Coach Fedee decided to begin coaching. 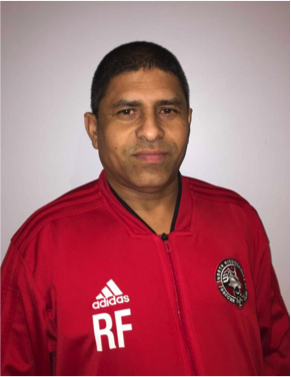 Coach Fedee has been coaching for over fifteen years now and has spent the last seven of them with North Mississauga Soccer Club. Although he was once skeptic about the idea of becoming a coach, Ramon says “I’ve loved it and would love to keep doing it for as long as I can.”

When asked about what has been the most rewarding part of it all, Coach Ramon said, “When I bump into some of the kids that I had an opportunity to be a part of their lives through coaching soccer and see they grew up to be good members of society and they remember me and kids it makes me smile.”

Ahead of this season in the OPDL, Coach Fedee shared his coaching style and how he approaches coaching his players. “My style is more of a guided discovery style but I also like to try new and out-of-the-box ideas.” When it comes to key strengths he wants his players to have Coach Fedee said, “The key strength is having the basic technical fundamentals of the game. Identifying a player’s technical abilities is paramount, from there we can ask them to play the game.”

Throughout his years of coaching, Coach Fedee said he has one vivid memory that sticks out above all:

“When my kids were around 7 or 8 years old and we switched schools and we were all worried about how they would adjust. I never forget the first day at the new school because as soon as I approached the classrooms of both my kids, almost half of the class started screaming “Coach Ramon”, “Julian” and “Leah” . At the end of the week I got a call from the school saying that they had never seen two children switch schools mid-term and adjust so well.

From that day to this day I always say to parents when you enroll your child in soccer they will be getting so much more than just soccer… they are getting life skills that that will last them a lifetime which you cannot pay for.”

From all the Panthers at North Mississauga Soccer Club, thank you Coach!