The 2018 League1 Ontario season awaits the North Mississauga Panthers and they hope to impress their supporters in the opening match. They travel to take on Alliance United FC this Sunday, April 29th to Centennial College in Scarborough.

This past Thursday, April 19th we caught up with Coaches Sam Medeiros (Men’s Team) and Eduardo Ramirez (Women’s Team) at the Season Launch Party. 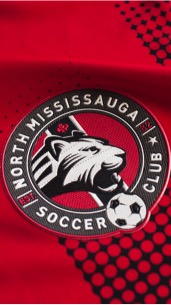 At the Launch, Operations Manager Christopher Keem, introduced the new League 1 Ontario uniform supplier and kits by Inaria for this promising season. “It’s nice to be back in business with North Mississauga Soccer,” said Savario Michielli -owner of Inaria.

NMSC’s supporter groups, the Red Street Elite and the ‘Sauga City Collective, huddled around the new kits and eagerly asked where they could order their own replica’s. “These supporters will be vital in pushing the club to the top of the table. Their role as the 12th man is vital to our success,” according to Christopher Keem.

Both Supporters groups were quite excited to hear from both the men’s and women’s team coaches. Pleased with the assurances of both, to bring quality attacking soccer to Mississauga this season.

The Panther’s Men’s first opponent, Alliance United FC, is a new addition to League 1 Ontario. The trip to Centennial College’s ground will be where the Panthers will start off their 2018 Campaign and will be a good test for both of these teams.

Fifth place finishers last season has definitely left coach Sam with a bitter taste in his mouth and has his sights set on finishing within the league’s top spots. “At the season kick-off, everybody’s nervous, coaches want to do more, to show that they did a great job in the preseason, and can do a good job. We have an ego…, at any given day, any coach can do well,” exclaimed Coach Sam.

Sam and his staff will be eager to get their first three points of the season. They have been busy adding some new names to the roster, and are feeling confident for this opening challenge on Sunday.